January 2, 1929, Warren, Ohio Died: September 2, 2010, Riverside, California Bob Loveless, also known as R.W. Loveless, Robert Robert Waldorf Loveless, or aka “Big Bad Bob” was and still is the most iconic bladesmith to have walked the earth. Loveless led a fascinating life of adventure beginning with growing up on a farm with his grandparents in Ohio, where he saw his Grandfather’s friend pull out a three-inch jackknife and altogether field dress a deer. Bob said, “That impressed the shit out of me, and my love for knives began at the age of 10.” At fourteen, he made his first solo airplane flight. He joined the Merchant Marines by lying about his age to get in at 15 instead of 18. Later, Bob Loveless, the man, operated a control tower for the Air Force on the island of Iwo Jima. Loveless was commissioned by a secret agent from the CIA during the Vietnam War to make knives (known as Bob Loveless Chute Knives) for Harry Archer and send the bill to the Pentagon. Maybe you didn’t know that he was great friends with David Crosby of the rock band Crosby, Stills and Nash and that they would go out on week-long party adventures together? Nobody knew that John Lennon came and spent the day at his shop, and Loveless was neither impressed by his long hair nor his music. (Can you imagine all the people... who would have killed to have spent the day with a Beatle?) He had a colorful collection of men’s baker boys hats, and sometimes people would bring them to him as gifts. Many don’t know how ironic it is that he made his living designing and making knives when his mother and stepfather died at the hand of a knife. However, that didn’t stop him from making knives and becoming the legend of the custom knife world that we know Bob Loveless to be today. Back in 1954, at the tender age of 25, Loveless started his career by making knives with whatever materials he could get his hands on, such as car springs and reinventing the knife world. Bob attended Chicago’s Institute of Technology school of design after WWII ended, along with his service to the country, where he discovered his love for the Bauhaus movement. The Bauhaus movement was all about joining fine art and functional design, which created practical objects and the soul of artwork. Those crudely constructed designs would lead him to a foot in the door to Abercrombie & Fitch, which back in the ‘50s was strictly an outdoors and sporting goods store. Bob sold hunters, sub-hilt bowies, and fighters to them at the tender age of 25. Not many knife makers can lay claim to such early success. Although Loveless had a reputation for being somewhat difficult to deal with at times, he was eager to share his skills and teach knife making to anyone patient enough to listen and learn. That being said, it didn’t mean they would be talented enough to create the same beautiful and well-balanced knives that Bob Loveless did. Throughout his career, Loveless partnered with a few talented knife makers to help keep up with the high demand for his knives. Loveless had two shop partners; Steve Johnson circa 1971 - 1974 who’s fit and finish is incomparable to anyone, and finally, his longest-lasting partner, Jim Merritt, circa 1982 - 2010, whos partnership ended with Loveless’s death. No doubt that Bob Loveless had some catchy sayings about his knives and here are some of our favorites: “They look so good you want to pick them up and feel so good you don’t want to put them down.” “You will always catch your thumbnail on my knives somewhere. If you want a perfect knife, go buy a factory-made one”. This one is about the red liner between the handle and the tang: “Because every woman needs a little red lipstick.” When asked why he invented the sub-hilt: “Because you don’t want to get your knife stuck in someone, you want to be able to pull it out” (referring to Harry Archer CIA Vietnam War) (We will put more on the site as we think of them.) When Bob passed away, his cigarette smoke left along with his legacy. When Jim died, the Loveless knives shop was permanently closed and, according to the family wishes, never to be carried on again.

It's important (to us) that you know what to look for in a genuine Vintage Bob Loveless Knife. (Even if you don't get it from us). All collectors of anything priceless must understand that being educated on what you collect helps keep you from losing money. We feel we must inform Bob Loveless fans on both histories and keep up with current rumors (to squash) for anyone interested in Bob Loveless's knives.

Whether you buy, sell, or trade from us or someone else. We want you to make the right decision. Please use this website as an educational tool. (we sell knives too) We care about the integrity and upholding the legend of Bob Loveless, Steve Johnson, and Jim Merritt. Keep cool in this summer heat, stay safe; keep checking back; most importantly, thanks for your patience.

We only deal in Vintage Bob Loveless Knives. My collection fluctuates sometimes hourly! So, if there is something you don't see, it doesn't mean we don't have it. If there is a knife you want, or you have something to sell or trade, give me a call.

We are all over it now. Join us on Facebook, Pinterest and Instagram. Join our Newsletter! John has been sharing in-depth exclusive stories about his experiences with Bob from over 35 years ago. Plus be the first to find out the latest knives he has gotten in his collection. See all the links  at the end of this page!

John has been dealing exclusively in Vintage Bob Loveless knives since 1983 with pride that he has provided only trusted and loyal service. He knows these knives like the back of his hand. He knew Bob too. John is overflowing with stories, facts, history and has handled over 3,000 knives throughout his career.

John and his collection is known world wide. His collection and personally written articles have been published throughout the decades from the East Coast of the United States to Japan. People come up to him at knife shows who speak little English and want their picture made with him and his collection.

See an Interview with JW Denton

In this 1 hour film, JW talks about the history of Bob's knives. Our talented and good friend David Sellers of Appalachian Video Productions and Appalachian Gallery has filmed and produced this one hour interview.
View Here »

In this 30 minute film, John brings out a selection of Bob's knives and shares details at a gathering of the Georgia Knife Makers Guild in the North Georgia Mountains. You'll also see Q&A with the knife makers. Video by David Sellers.
View Here »

We try to get out a newsletter at least once every other month, sooner if something special comes up. The newsletter is always packed with historic stories, documents and / or new inventory before it hits the website. Don't miss out!
Newsletter sign up: Click here »

The Educated Buyer Stays on Top 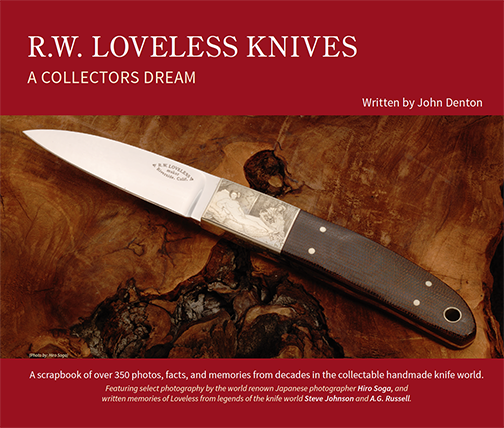 IIt is so important to be educated about what you are collecting. John is happy to tell you anything you need to know about his collection. We have put together some of it here for you. It will be updated periodically. keep checking back. Buy the book here »

When you buy or trade a knife from John, he will pay for overnight express insured signature required shipping to anywhere in the world.

You can rest assured that your knife will get to you safe and sound.

Visit us at Trade Shows:

We do venture out of the breath taking mountains to trade shows. Check out below for dates/links for where we will be.
The Blade Show

Copyright © 2020 John Denton. All Rights Reserved. Bad Bob's Knives is a Registered Trademark owned by John Denton 2016. We are in no way affiliated with the “R.W. Loveless Knives, Bob Loveless, or Loveless Knives” logos and products being made after Bob’s death nor any late period knives.